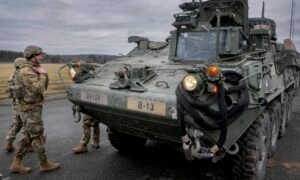 WASHINGTON—The United States will send 90 Stryker combat vehicles and an additional 59 Bradley fighting vehicles to Ukraine, in addition to hundreds of thousands of rounds of ammunition, the Pentagon announced on Thursday. It is the latest aid package timed to help Ukraine push back against Russia’s entrenched forward lines.

The package, valued at $2.5 billion, does not include tanks, which has become a point of contention as Germany has indicated it will not send its own Leopard tanks to Ukraine unless the United States sends the Abrams. The United States has said that the Abrams tank, which is propelled by a complex turbine engine similar to an aircraft jet engine, would not be a good fit for the current fight because of its frequent maintenance and fueling needs.

The more heavily armored and tracked Bradleys and the medium-armored Strykers will provide Ukraine “with two brigades of armored capability,” the Pentagon said in a news release.

The Army operates more than 550 Strykers in a variety of configurations. The wheeled and armored Stryker, being supplied to Ukraine for the first time, can be modified to provide medical evacuation or reconnaissance or serve as a nuclear, biological, and chemical response vehicle, in addition to speeding infantry squadrons into a battle.

The two armored vehicles serve different purposes. The Bradley brings more firepower, with its cannon and anti-tank missile launchers. The more lightly armored Stryker, because it is wheeled, can move a lot faster on paved roads, meaning it can get infantry squadrons into the fight faster.

The additional air defense systems and ammunition are being sent to help Ukraine defend against the onslaught of Russian missile attacks against its civilian population, the Pentagon said, including a Russian missile strike on an apartment building in Dnipro last weekend that left at least 45 dead, including children.

The $2.5 billion package is one of several recent multibillion-dollar announcements of aid for Ukraine as the United States and allies rush heavy weapons to Kyiv in advance of an expected Russian spring offensive. The new aid package brings total U.S. military assistance to Ukraine to $26.7 billion since Russia invaded in February.

Defense Secretary Lloyd Austin is in Germany and will meet Friday with the Ukraine Defense Contact Group, representatives of about 50 countries that coordinate the weapons support.