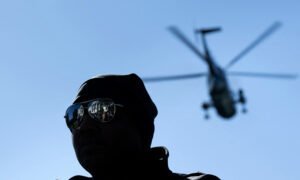 President Joe Biden’s home in Delaware has played host to many different guests over the years; now Republican lawmakers are trying to determine exactly who visited the Wilmington residence after multiple potentially classified documents were discovered on the property.

On Sunday, House Oversight Committee Chairman James Comer (R-Ky.) sent a letter to the Biden White House, requesting that he release the visitors logs for his residence from the start of Biden’s presidency onward. The Biden White House soon replied that it does not keep visitor logs for the personal residence.

Even without full visitor logs, publicly available information has indicated that a number of visitors have been to the Delaware property in recent years. For example, an October 2021 White House press release stated Biden hosted Sens. Chuck Schumer (D-N.Y.) and Joe Manchin (D-W.Va.) at the property to discuss Biden’s political agenda.

In his letter to the White House, Comer also said his committee is in possession of evidence that the president’s son, Hunter Biden, listed his father’s Wilmington address on his driver’s license as recently as 2018.

Biden’s Wilmington home served as a location for several key meetings in his 2020 presidential campaign.

In their 2021 book “Lucky: How Joe Biden Barely Won the Presidency,” journalists Amie Parnes and Jonathan Allen described how the 2020 Biden campaign held several campaign meetings in Biden’s home. One excerpt from the book described a meeting in January 2019, in which Biden met at his home with his political advisers, including long-time confidante Steve Ricchetti, campaign manager Greg Shultz, and “heavyweight money bundler” Mark Gilbert.

Another excerpt describes a March 12, 2020, meeting in which Biden gathered at his house with his debate prep team, a group that included his sister, Valerie Owens Biden, and his press aide Elizabeth Alexander. Also present at that meeting was the current White House Chief of Staff Ron Klain, current Deputy White House Chief of Staff Jen O’Malley Dillon, 2020 deputy campaign adviser Kate Bedingfield, 2020 campaign adviser Symone Sanders, and “a handful of other advisers.”

Bob Bauer, the former White House counsel for the Obama administration, also participated in debate prep with Biden in the basement of his Wilmington home, preparing him for the final three debates before the 2020 general election, according to the book.

In “The Fight of His Life: Inside Joe Biden’s White House,” author Chris Whipple also described how Biden was in the library of his Wilmington home on Jan. 6, 2021, with current White House Deputy Chief of Staff Bruce Reed when they saw the news that demonstrators had breached the U.S. Capitol.

While the Biden administration has said it doesn’t keep track of visitors at Biden’s personal residence, Comer’s House Oversight Committee has said it will continue to search for answers on who had access to the property.

“President Biden promised to have the most transparent administration in history but he refuses to be transparent when it matters most,” the official GOP House Oversight Committee account posted on Twitter. “Americans need to know who had access to these classified documents. We’ll continue to press for answers.”

President Biden promised to have the most transparent administration in history but he refuses to be transparent when it matters most.

Americans need to know who had access to these classified documents.

We’ll continue to press for answers.https://t.co/axuJ8B5GPa