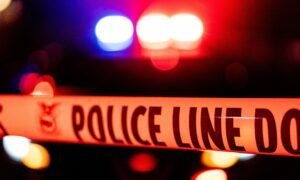 LONG BEACH, Calif.—Police Jan. 22 were searching for the occupants of an SUV who drove up to a basketball court in Long Beach and opened fire, killing a 17-year-old boy and wounding two men.

Officers responded to a report of gunshots at 1:51 p.m. Saturday at Silverado Park, in the 1500 block of West 31st Street near John Muir Elementary School, according to the Long Beach Police Department.

Police identified the dead boy as Khalil Saleem of Long Beach. Paramedics rushed him to a hospital with a gunshot wound, where he later died from his injuries.

“An unidentified subject who was also on the basketball courts returned fire at the suspect vehicle,” police said. “The suspect vehicle immediately fled the scene prior to officers’ arrival.”

The motive for the shooting was unknown and police had no additional suspect information.