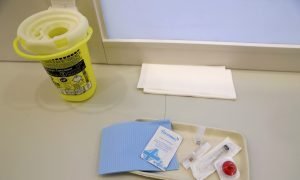 SANTA CLARA, Calif.—In a virtual international press conference on June 2, drug experts voiced their concerns about what will happen if a California bill to allow drug injection sites is passed.

If the bill is passed, it will be permissible to set up sites for people to legally use illegal drugs under medical supervision, especially in San Francisco. The bill states that drug overdose “has been the leading cause of accidental death in the United States and in California each year since 2011.”

SB-57 states that overdose prevention programs, or OPPs, “are an evidence-based harm reduction strategy that allows individuals to consume drugs in a hygienic environment under the supervision of staff trained to intervene if the individual overdoses.”

However, some drug experts say the program would likely do more harm than good.

“SB-57 actually encourages people to use illegal drugs, since it’s not mandatory for the drug addicts to undergo drug treatment after getting injection[s] at the sites. Which normally ends up being madness for drug addicts and drug dealers,” said Frank Lee, director of California Coalition Against Drugs, at the press conference.

Lee said the bill would make it harder to prosecute anyone carrying drugs. People will have plausible deniability by saying they are taking drugs to an injection center.

“We cannot stabilize communities on addiction. It’s impossible. So the outcome that is being preached is that we are going to stabilize our communities by feeding addicted users what they’re addicted to. We understand that we are doomed for failure,” said Tak Allen, President of the International Faith Based Coalition.

In 2020, the San Francisco Department of Public Health released data showing sharp increases in drug overdose deaths during the first half of 2019, mostly from fentanyl.

In April 2021, the city reported a total of 203 accidental overdose deaths between January and March, with 141 involving fentanyl.

“In actuality, we are not focusing our attention on the root cause of the issue. Drug addiction is a behavioral health issue. And we’re putting our funding towards the continuity and the perpetuation of addiction versus helping people to recover, to rehab, to provide resources to them, to get their lives back on track, and to stabilize,” Allen said.

Opponents of the bill warn that laws favoring drug users could pave the way for legalizing all drugs eventually.

The bill states: “There are approximately 165 overdose prevention programs operating in 10 countries around the world. Numerous peer-reviewed studies have confirmed that OPPs are effective in reducing overdose deaths and HIV transmission, and in increasing access to counseling, treatment, and other risk reduction services. Research has also demonstrated that OPPs decrease use of emergency medical services, reduce public drug use, reduce syringe debris, and do not increase crime or drug use.”

At the press conference, drug experts in other countries that have existing injection sites shared their experiences and the consequences they observed.

“When you go to the first objective, to reduce discarded needles, you can find within [the] report, they admit within the report local people saw no difference in the number of discarded needles after the injecting room opened. In fact, there are actually more,” said Gary Christian, research director at Drug Free Australia.

They pointed out that overdose-related deaths have doubled and in some cases tripled since 2011.

“Not one human being that we know of, that has a human name, has ever been sent from onsite to a real recovery program. Not one. That’s a fact. Ever,” said David Berner, honorary member of the Drug Prevention Network of Canada.

They said that many of the laws are created to favor drug users and don’t consider how the rest of society, or their loved ones, would be impacted.

2A Gun Permit Coin – Claim Yours for FREE Today!