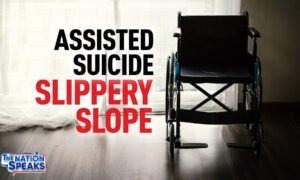 Canada is now a world leader in physician-assisted suicide (PAS)—and it only took a few years to get there. Critics of medical assistance in dying, or MAiD as Canada calls it, point to Canada as a prime example of how slippery the slope can be once the line is crossed and the practice is made legal. We discuss how things have developed in Canada over the last seven years with independent journalist Rupa Subramanya.

In the United States, PAS is legal in nine states and D.C., and some of those jurisdictions are thinking of expanding eligibility to be more like Canada. In America Q&A we ask if you think U.S. assisted suicide laws should be expanded to include people who aren’t terminally ill?

Next, Montana is the only state where assisted suicide is legally ambiguous. That’s because of a 2009 Montana Supreme Court decision. State Senator Carl Glimm (R) tells us why he’s trying for a third time to fix the loophole.

Finally, floods, fires, hurricanes—they can happen. In our second America Q&A we ask: Do you and your family have a plan in case of an emergency?