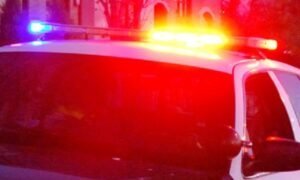 A shooting in Denver, Colorado, on Monday has resulted in three people dying, including a veteran police officer and the suspect, police said.

The incident occurred at a downtown shopping district in the Denver suburb of Arvada, also referred to as Olde Town Arvada.

Deputy Chief Ed Brady told a press conference on Monday afternoon that the officer responded to a call at 1:15 p.m. that reported a “suspicious” incident near the library. About 15 minutes later, a 911 call reported that shots were fired, and the officer was hit and killed.

Police fatally shot the suspect after he allegedly shot a civilian who was described as a “Samaritan,” according to Brady.

According to Detective David Snelling, the person who was believed to have been shot by the suspect was taken to hospital by ambulance but later died.

“There is no threat to the public at this point,” Brady said, reported the Denver Post. “We’re not searching for anybody else.”

Both the officer and the suspect were confirmed as male. Police have yet to identify any of those who died publicly.

The circumstances of the shooting were not elaborated on further, but the police did say that no one else is believed to have been involved. It comes after the police had earlier said there were two suspects.

The Denver Police Department said in a statement on Twitter, “Our deepest condolences to @ArvadaPolice and the family and friends of the officer who lost their life in the line of duty today. Our hearts are with you during this difficult time.”

The department earlier in the day described the incident as “a very large-scale scene.”

The Arvada Police Department asked the public to not create any fundraising pages for the deceased officer, and pointed to the Colorado Hero Foundation’s website as “the only official donation site for the fallen officer” for those who wish to make donations.

The incident also caused a temporary closure of a light rail station in the downtown district.

Arvada Mayor Marc Williams said he was in his car in the area shortly before 2 p.m., when he saw almost a dozen police cars with flashing lights and sirens race past him. “I knew something serious had happened. I didn’t know how serious,” he said, adding that he heard gunshots near the library about a block away about five minutes later.

“This is a very sad, dark day,” he told local station KUSA in initial comments after the shooting.

The Olde Town Arvada’s Water Tower, a landmark in the city, will be lit blue in the coming week to honor the fallen officer, reported KMGH. Flags will also be lowered at half-staff.

The incident comes after a mass shooting in March in Boulder—about 20 miles (32 kilometers) northwest of Arvada. A shooter opened fire, hitting 10 people, including a police officer. The shooting suspect, Ahmad Al Aliwi Alissa, from Arvada, made his second court appearance in late May. A September hearing has been scheduled to review evidence in the case.