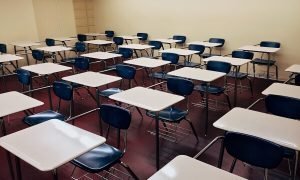 An English teacher has resigned from a New Jersey prep school, citing the prevalence of what she called a “hostile culture of conformity and fear.”

Dana Stangel-Plowe has been teaching English at Dwight-Englewood School since 2014. She said in her resignation letter that the school has embraced “regressive and illiberal” tenets akin to those of critical race theory, a Marxist offshoot that views society through the lens of a power struggle between “oppressors” and “the oppressed,” with a particular focus on race.

“The school’s ideology requires students to see themselves not as individuals, but as representatives of a group, forcing them to adopt the status of privilege or victimhood,” Stangel-Plowe wrote in the letter, which was published online by the Foundation Against Intolerance and Racism (FAIR), a non-profit organization seeking to promote the core principles of the original civil rights movement.

Stangel-Plowe moved on to describe how students at Dwight-Englewood, which charges around $52,000 per year for those in grades six to 12, have become so closed-minded to the point that they are unable to read literature from a perspective other than power or identity politics.

Students not under the sway of this ideology find themselves engaging in self-censorship out of fear of offending someone or being alienated, Stangel-Plowe wrote. Teachers are also afraid to speak out, she said, after the school’s principal “told the entire faculty that he would fire us all if he could so that he could replace us all with people of color.”

Teachers were separated by skin color during a recent faculty meeting, she claimed, adding that those assigned to a “white caucus” group were reminded to “take responsibility for power and privilege.”

“I reject D-E’s essentialist, racialist thinking about myself, my colleagues, and my students,” Stangel-Plowe wrote. “D-E claims that we teach students how to think, not what to think. But sadly, that is just no longer true.”

The school didn’t respond to requests for comments over the former teacher’s claims, but in a statement to the New York Post, Dwight-Englewood Principal Joe Algrant said he could not comment on personnel matters.

“In this case all I can say is that Ms. Stangel-Plowe notified us several months ago that she would not be returning next school year,” he said.