Former U.S. Capitol Police Chief Steven Sund’s new book-length reflection on Jan. 6 addresses the command failures that happened during the protests and rioting while decrying the bureaucratic red tape that kept the National Guard from reaching the Capitol until the trouble was largely over.

Sund, 57, who was forced to resign almost immediately after Jan. 6, is out with his own story, unfiltered by government bureaucracy or stifled by Capitol Hill politicians.

In an interview with The Epoch Times, Sund said he felt it was time to set the record straight.

“I wrote an eight-page letter to leadership in Congress to try and describe to them what I thought were some of the big issues that happened that day—got zero responses,” Sund said. “I sent a second follow-up email, got one response. 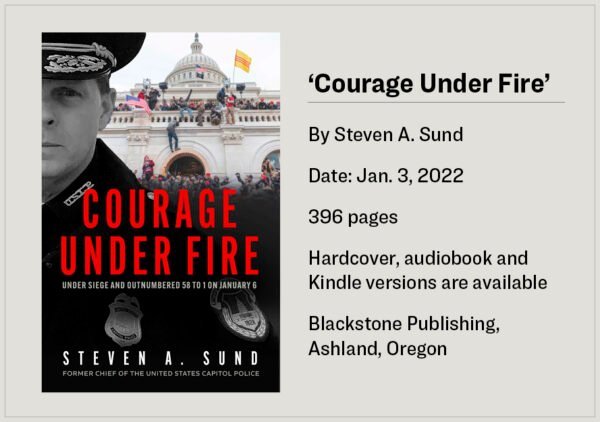 “I was seeing an erroneous history being written by people out there and people didn’t know the facts,” he said. “My officers didn’t know what happened up there [in the Command Center]. What were some of the issues I faced.

“I wanted to defend them for some of the stuff that people were saying that they were doing. They were being vilified.”

Until Jan. 8, 2021, Sund led one of the 30 largest police departments in America, with more than 1,800 sworn officers and more than 500 civilian employees. He was seemingly an easy scapegoat after the Jan. 6 protests led to thousands of people in the Capitol and significant violence in and outside the building.

“Even some of the lawmakers on Capitol Hill came out against my officers, saying they’re racist, complicit, you know, things like that,” Sund said.

“That could not be farther from the truth. Matter of fact, the very next morning at 10 o’clock I put out a statement saying I couldn’t be prouder of my officers.

“Then I got torn away from the department I absolutely love,” he said. “So I felt it was necessary for my officers to, you know, understand the truth that I faced. But also for someone to stand up. I’ll tell you, the outpouring of support from them tells me everything I need to know.”

In an interview with The Epoch Times, Sund did not shy away from the failures of the day.

He said intelligence failure was a crucial issue. Information that was available at the time was not shared, so planning was not robust enough.

Intelligence about possible violent groups in the crowd would have impacted planning decisions such as the type of barricades and fences used.

“If the intelligence had been more accurate, we would have been able to have better physical security there that day,” Sund said. “Without a doubt.”

Sund said although he had no access to recordings of the radio communications from Jan. 6, he now knows there were problems in the Command Center on the 7th floor of USCP headquarters on D Street in Washington.

“I address that in the book, that there definitely seems to be a breakdown of command in the Command Center of monitoring the radio communication, just overall incident command,” Sund said.

Sund said he read The Epoch Times’ Jan. 10 investigation that described how then Lt. Tarik K. Johnson tried in vain to get authorization from Assistant Chief Yogananda Pittman to begin evacuating Congress.

Johnson’s pleas over the radio were not answered, so he initiated the evacuation of both houses of Congress on his own. Johnson said the silence from the Command Center crippled his efforts all afternoon.

“I think what TK [Johnson] did was pretty heroic,” Sund said….

“Again, I haven’t listened to the audio tapes. From what you have in the article, you know, he attempted numerous times … over the radio to get guidance. When he didn’t get it, he went ahead and initiated his own action.

“… That’s something that I wish I would have been more aware of,” Sund said.

Johnson told The Epoch Times that had the Command Center acted earlier based on his requests, both the Senate and House would have evacuated sooner, and the deadly shooting of Ashli Babbitt, 35, by USCP Lt. Michael Byrd might not have occurred.

“I made the evacuation order at approximately 2:28 p.m. for the Senate, and then I did it maybe six to eight minutes later for the House,” Johnson said.

Sund said the decisions on evacuation should have been made well before the period between 2:15 p.m. and 2:28 p.m. when congressional leaders and then the Senate were evacuated.

“When we saw that, even on the east front, we were overwhelmed with personnel that are starting to break through our lines, it was pretty clear that we were getting close to losing the Capitol,” he said.

“The Command Center, we’re in the position—my two assistant chiefs and myself—to see that from a higher level,” Sund said. “We should have pulled the trigger on that a lot earlier.”

Sund said the USCP Command Center should have transitioned to a system more conducive to managing the chaos of multiple events.

“The Command Center should have transitioned into an area command structure,” Sund said. “Because we had a number of different things going on. We had the certification of the Electoral College going on inside the Capitol.

“We had fights raging on the west front and the east front,” he said. “The area command should have been able to make sure those will be managed appropriately.”

The truly dark cloud of the afternoon on Jan. 6 was trying to secure help from the D.C. National Guard, he said.

Sund made repeated calls to the House and Senate sergeants at arms and the Department of Defense but was met with delays, resistance, and excuses. The result was that National Guard boots did not hit the Capitol sidewalks until after 5:30 p.m. when the crowds had mostly dispersed.

There was resistance to the “optics” of troops at the Capitol from House Sergeant at Arms Paul Irving and some officials at the Pentagon, he said. The whole idea of resistance for that reason was “very perplexing,” he said.

“I do think politics plays a role in it,” Sund said. “I just think the images of my men and women fighting their behinds off and not getting any assistance, I think it’s a far worse image than military being on Capitol grounds.

“… Then when they finally arrived, what do they do? They line up to take a picture with the Capitol in the background. Very optic.”

The multiple calls to the Department of Defense and the resulting delays stood in marked contrast to mutual aid that came in the form of 1,700 officers from 17 area law-enforcement agencies that rushed from as far away as New Jersey to shore up Capitol Police, Sund said.

He activated the Metropolitan Washington Council of Governments Mutual Aid Pact at about 1:50 p.m.

Sund echoed some of the testimony given in federal court on Jan. 11 by USCP Capt. Carneysha Mendoza who said the leading edges of some of the large groups that came to Capitol included well-trained, violent provocateurs.

“I look at it as your classic mob attack,” Sund said. “I do think that you had some core groups of people in there that had come with a mission and activated other people within the group, you know, maybe some to a greater degree, some to a lesser degree.

“But I do think you had a core group in there that really got in and tried to activate the group into a mob mentality,” he said.

Sund said he wrote “Courage Under Fire” to be as politically neutral as possible, a contrast to some other Jan. 6 tomes that were “so politicized.”

“You shouldn’t know my political leanings when I pull you over, or when I come up to do a First Amendment demonstration, or come into someone’s house to handle something,” Sund said.

“I’m a police officer there to provide a public service, especially law enforcement that handles multiple First Amendment demonstrations around the Capitol,” he said. “People should not know your personal political leanings.”

Joseph M. Hanneman is a reporter for The Epoch Times with a focus on the Jan. 6 U.S. Capitol incursion and its aftermath; and general news in the State of Wisconsin. His work over a nearly 40-year career has appeared in Catholic World Report, the Racine Journal Times, the Wisconsin State Journal and the Chicago Tribune. Reach him at: joseph.hanneman@epochtimes.us