Inventor of mRNA vaccines Dr. Robert Malone, having worked with the U.S. Department of Defense (DOD) for many years, warns that a war is being waged by the government for control of people’s minds, and that social media platforms are being weaponized in this war and are “actively employed” by the intelligence community to influence what people think and feel.

“This new battleground, in which your mind and your thoughts, your very emotions are the battleground. It is not about territory,” Malone said during a recent interview for EpochTV’s “American Thought Leaders” program. “Twitter, it’s clear now, has become the premium platform for shaping emerging global consensus about the topics of the day.”

During his work with the DOD, Malone became aware of companies researching multilingual programs that assess the emotional content of the language used on social media, which those companies then use to “map relationship clouds,” including what topics people are discussing, who the influencers are, and who is at the fringe of that cloud, said Malone.

Phenomena like being deplatformed, shadowbanned, and a “tweet” going viral is a part of this weaponizing of social media.

“By using these tools of manipulating what information, what tweets you put out, what messages you put out to your influencer cloud, they can modulate how those people behave,” he said. “You can actually very actively control what individuals are thinking, the information that they’re gathering, what they’re being influenced to do.”

The people who control information warfare weapons can modulate the messaging within the influencer clouds that can be readily mapped, Malone said.

“Your current state of mind, based on the language that you’re using and the topics that you’re talking about, can be mapped very precisely, psychologically,” he said. “It can be tied into a web of influence relationships.”

Members of a specific “influencer cloud” can be tracked using the military spy technology called the Gorgon Stare, said Malone. This spy technology is capable of detecting movements including what car you drive, who gets in your car, and where you go, he said.

The Gorgon Stare is a surveillance technology, originally created to target terrorist groups, that utilizes high-tech cameras mounted on drones to capture video images of large areas, such as entire cities. Then artificial intelligence is used to analyze the surveillance footage.

Arthur Holland Michel, author of the book, “Eyes in the Sky: The Secret Rise of Gorgon Stare and How It Will Watch Us All,” called this technology the “pinnacle of aerial surveillance” during a 2019 interview with the CATO Institute and said the things he learned while writing the book were so troubling, they kept him up at night.

Collusion During the Pandemic

Elon Musk has brought more transparency to Twitter, but the information he revealed only confirmed that the FBI and intelligence agencies had major influence over the platform, said Malone.

“Elon now is in a position where he has access to incredibly damaging information about the willingness of the U.S. government to collude with industry and compromise the First Amendment,” said Malone.

Musk’s purchase of Twitter is significant, but only time will tell what the final outcome of it will have for our democracy and the First Amendment, Malone added.

Since the start of the pandemic, Malone and his wife and fellow scientist, Jill Glasspool Malone, have become aware of the government’s breach of all guardrails, said Malone, in terms of ethics and the norms of drug development, bioethics, biodefense, and pharmaceutical development.

“We have all been subjected, over the last three years, to military-grade psychological operations that were using technology developed for offshore conflicts, and they had been deployed against the citizens of virtually the entire Western world.”

The same strategies that are used by the Chinese Communist Party (CCP) to control the Chinese citizens have been used by elites in the United States, said Malone.

“We’re now seeing the documentation on a daily basis released to us by Twitter, of this intense collusion between the U.S. government, tech, and corporate media,” said Malone.

Millions of Americans accepted a new product (the mRNA vaccine) that skipped normal safety and efficacy protocols and is still only in use under emergency use authorization because “the government felt that it was acceptable to deploy these military-grade technologies against all of us to coerce, compel, and mandate that we accept an unlicensed product that turns out to not be safe, nor effective,” said Malone.

People were coerced into taking this experimental vaccine because they were manipulated on a scale that is hard to fathom, said Malone. This is how entities like the CCP are able to carry out human rights atrocities, like live organ harvesting, where prisoners of consciousness are murdered for their organs, he added.

China grew its organ “transplant” industry from 1999 to now, with a wait time in China for a major organ transplant being months rather than the years it can take in western countries.

This happens because people cannot conceive of “the possibility that these things might be happening in this way, whether it’s organ harvesting, or it’s the darkness of what appears to be the emergence of a pharmaceutical corporatist, global, centralized state,” said Malone.

Most people cannot fathom such evil exists because they are still good, said Malone.

Malone’s new book attempts to sort through the events of the last three years to understand what happened and why, which he said is important to start to chart a healthy path forward.

“Each of these chapters derives from a kind of a real-time assessment of events that were occurring,” he said, and the events were also cited in Malone’s substack writings.

Readers should discern the truth for themselves by finding credible sources of information, he said, adding that his goal is to provide factual information to the public so they can make informed decisions because society is in a time when people are being inundated with “totalitarian propaganda.”

In the final third of the book, Malone suggests some concrete actions that could help restore democracy and alleviate the corruption that has besieged the federal government by changing laws to allow for term limits for the federal bureaucracy.

“This has to do with things like the legal underpinning that enables the existence of this permanent cadre that we call the Senior Executive Service, these thousands of people that cannot be fired, that functionally run the government,” said Malone.

Former President Donald Trump’s attempt to reassign classification for upper-level federal employees in the state department, with his schedule F executive order, was a crucial step to restoring balance in the three branches of the government, said Malone.

However, after President Joe Biden took office, he nullified the Schedule F executive order, which Malone said was “an example of how powerful these entrenched administrative state interests are.”

Another crucial step to end government corruption is to separate the power of federal agencies to both regulate and promote the industry they are in charge of, said Malone.

“[Dr.] Peter McCullough likes to point out the FDA, under emergency use authorization, acts as both the sponsor and the regulator of these medical products,” said Malone. “And the corruption of the FDA and the CDC is at such a stage now that I think it is so self-evident that only the most hypnotized deny it.”

These actions alone will likely not end the deep-rooted corruption and collusion of the intelligence community within the agencies, said Malone, but it is a step forward.

People like Dr. Anthony Fauci are working in tandem with the intelligence agencies, and this can be seen by the development of the new National Institutes of Health (NIH) department, the Advance Research Projects Agency for Health (ARPA-H), said Malone.

The Epoch Times reached out to the NIH for comment.

This new department is led by a former officer with the Defense Advanced Research Projects Agency (DARPA) and has a budget of about $1 billion. Malone said the purpose of the department “appears to be the advancement of transhumanism and a biometric identification and all of that agenda within NIH. It’s basically the intelligence community moving in within NIH.”

Malone asked how humans can “enable a decentralized future for all of us, as opposed to this very dark, Fourth Industrial Revolution, transhumanism central command economy.”

There are initiatives that will give the power back to communities and individuals, including groups of doctors establishing new medical training institutes and citizens working to grow their own food locally.

“I think that our opportunity now is to help build a vision and a way of interacting that can better capture the potential of humanity in a decentralized way that celebrates our diversity, without needing to try to enforce some centralized diktat of how we are to live our lives,” said Malone.

Malone does not claim to have the answers to these issues, but said he wants to contribute to the process of figuring out how humanity can create a better future.

“I think it’s a journey worth taking.”

Masooma Haq began reporting for The Epoch Times from Pakistan in 2008. She currently covers a variety of topics including U.S. government, culture, and entertainment. 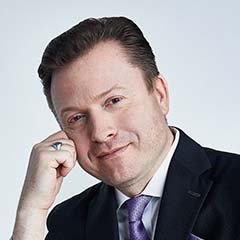 Jan Jekielek is a senior editor with The Epoch Times and host of the show, “American Thought Leaders.” Jan’s career has spanned academia, media, and international human rights work. In 2009 he joined The Epoch Times full time and has served in a variety of roles, including as website chief editor. He is the producer of the award-winning Holocaust documentary film “Finding Manny.”