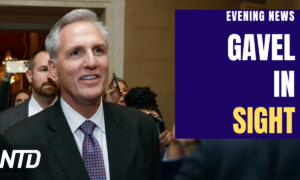 Rep. Kevin McCarthy on Jan. 6 inched closer to holding the speaker’s gavel for the 118th Congress, winning won over most of the 20 members who have opposed him all week.

Buffalo Bills safety Damar Hamlin is now talking and breathing on his own after having his breathing tube removed, according to his agent.