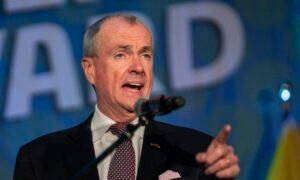 New Jersey Gov. Phil Murphy is encouraging parents in his state to take advantage of a newly enacted health care initiative that expands Medicaid coverage to an estimated 16,000 children who lack a legal immigration status.

The Medicaid expansion marks the Phase 2 of the “Cover All Kids” initiative aimed to provide all New Jersey children with health insurance, according to the governor’s office. As of Jan. 1, all individuals under the age of 19 may apply for the state’s Medicaid program, NJ FamilyCare, regardless of their immigration status, so long as their families meet income requirements.

To be eligible, the family must earn less than 355 percent of the federal poverty level, or $8,210 per month for a family of four.

The program is not considered a public charge, and therefore won’t affect a family’s chance of applying for permanent residency, according to the governor’s office.

“Every child should have access to health care,” Murphy, a Democrat, said Wednesday in a statement. “By helping more children get NJ FamilyCare coverage regardless of their immigration status, we are working to make New Jersey a fairer, more affordable place for all to live.”

The Murphy administration has allocated $11 million for the expansion.

The announcement comes days after Murphy, who won reelection in 2021 with a razor-thin margin, touted in this year’s State of the State speech his new program that would provide as much as $1,500 to eligible home owners and $450 to renters, as well as efforts to expand abortion access and keep “gun violence” in check by restricting guns.

“We created the ANCHOR Property Tax Relief program, a historic $2 billion investment in direct property tax relief,” he told the state lawmakers. “This is money going right back into the pockets of roughly two million New Jersey middle-class and working homeowners, seniors, and tenants.”

Unimpressed by Murphy’s claimed achievements, the Republicans on the state legislature said those expansive programs only make the Garden State a more pricey place to live.

“Government spending increased more than $16 billion since Gov. Murphy took office, and taxes have been raised 60 times, but people are still waiting for that ANCHOR check,” said General Assembly Minority Leader John DiMaio in response to Murphy’s address. “We lead the nation in out-migration, and people with real dollars leave the state to go to other states.”

“Abortion to the day of birth. Energy master plan four times more costly to families and businesses. Inappropriate sex education. Handcuffing law enforcement instead of criminals. Worst-in-the-nation taxes,” the senator said. “The state of the state is extreme, extreme, extreme.”