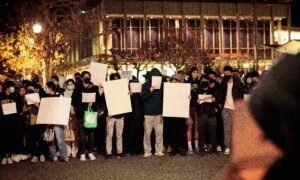 A candlelight vigil is held at the University of Southern California in Los Angeles on Nov. 29, mourning the victims of a Urumqi fire in China’s Xinjiang region last week. Participants are protesting in support of demonstrations held in China calling for an end to COVID-19 lockdowns.

Over the weekend, people took to the streets in major cities including Shanghai and Beijing, and gathered at university campuses across China to criticize the Chinese Communist Party’s (CCP) zero-COVID policy, confronting police and even calling for CCP leader Xi Jinping to step down. The widespread demonstrations are unprecedented since the 1989 Tiananmen Square massacre of the student-led pro-democracy movement.

Protests erupted after a fire last Thursday killed at least 10 people in an apartment building in the city of Urumqi in the northwest, where some residents have been locked in their homes for four months. That prompted an outpouring of angry questions online about whether firefighters or people trying to escape were blocked by locked doors or other pandemic restrictions.