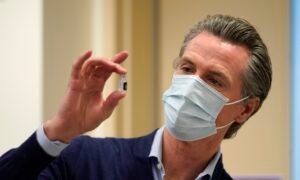 Despite California’s $116.5 million lottery initiative to encourage more residents to get vaccinated, the demand for vaccines in Orange County, Calif. is slowly declining, officials say.

Newsom has said the incentive aimed to give an extra nudge to those who still need to get vaccinated, but were hesitant to do so.

“Getting every eligible Californian vaccinated is how we bring our state roaring back from this pandemic,” Newsom said in a press release announcing the initiative. “California has already made incredible progress in the fight against COVID-19, with the lowest case rates in the country, while administering millions more vaccines than any other state. But we aren’t stopping there, we’re doing everything it takes to get Californians vaccinated as we approach June 15 to help us fully reopen safely.”

According to a pharmacist, the rate of inoculation at local pharmacies has also been declining steadily for a few weeks.

“Right now, it’s going down. Since three or four weeks ago,” the CVS pharmacist told The Epoch Times.

“While we have not seen a significant increase in demand… we will continue to provide education across MemorialCare to help address vaccine hesitancy in our community,” the hospital’s chief operating officer Catherine Shitara told The Epoch Times.

The decline of vaccine distribution comes a month after news the county would shut its vaccine super point dispensing (POD) site June 6, after observing a decline in demand for the sites.

Orange County’s vaccine demand was high from the beginning of April to April 23 before slowly declining. The peak vaccine distribution date for the county was on April 16 with 40,921 doses administered.

Following the state lottery initiative announcement, the demand for the vaccine has either remained steady or experienced no significant increase between 1,000 to 16,000 administered doses per day.

California’s lottery initiative includes $1.5 million cash prizes for 10 winners that are to be selected on the state’s reopening date, June 15. The lottery kicked off with its first drawing June 4, where 10 names were pulled for $50,000 prizes. A second drawing for 10 $50,000 prizes will be held June 11.

As of June 10, over 1.6 million Orange County residents are fully vaccinated with over 300,000 receiving at least one dose.