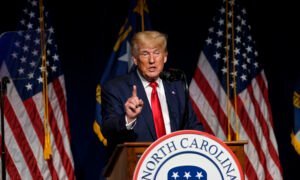 Former President Donald Trump said on June 5 that the United States and the world should demand pandemic reparations from the Chinese Communist Party (CCP), and urged the Biden administration to raise tariffs on Chinese goods to 100 percent.

The former president made the remarks at the annual state Republican Party convention in Greenville, North Carolina.

“The time has come for America and the world to demand reparations and accountability from the Communist Party of China. We should all declare within one unified voice that China must pay. They must pay,” Trump said. “The United States should immediately take steps to phase in a firm 100 percent tariff on all goods made in China.”

The CCP contributed to the COVID-19 pandemic by failing to notify global health authorities of the outbreak in Wuhan, China. The regime had locked down the megacity internally but allowed international flight in and out of its airports. COVID-19 is the disease caused by the CCP virus.

“Last year, China inflicted an estimated $16 trillion of economic damage onto the United States with a virus that I call the China Virus because I want to be accurate, that claimed the lives of hundreds of thousands of our fellow citizens,” the former president said.

Trump said that the pandemic changed his trade deal he was negotiating with China. At the time, his administration levied significant tariffs on Chinese goods and the CCP responded with tariffs of its own. The administration of President Joe Biden has kept the tariffs in place. Trump noted that “billions and billions of dollars is pouring in” as a result.

“This is the first time in a long time I’ve even mentioned the trade deal,” Trump said. “It’s really been very beneficial. But it’s so tiny compared to the devastation that’s been caused. We should reinvest 100 percent of all of that money that we collect from tariffs to help bring back jobs and factories from China and other places back to America and back to the great state of North Carolina where they belong.”

While rolling back many of Trump’s policies, the Biden administration has largely kept in place the tariffs and other measures imposed by his predecessor.

The speech in Greenville marked the second major public appearance by Trump since he left the White House in January. The former president has committed to remaining active in politics and hinted at another presidential run in 2024.